Home Page Visit the Park of Nations in Lisbon Oceanarium 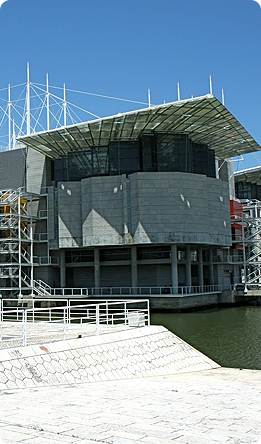 Opened in 1998 under the last world exposition of the century . XX , whose theme was " The oceans , a heritage for the future " , the Oceanarium of Lisbon immortalized the connection with the ocean .

The Lisbon Oceanarium is a public aquarium reference in Lisbon in Portugal and internationally . The equipment receives annually about 1 million people that run their exhibitions, making it the most visited cultural site in Portugal .

The excellence of the exhibits , allied to the symbolism of the architecture of the buildings , the Oceanarium is a unique and unforgettable place. The equipment includes two buildings , the original Oceans and new building of the Sea , connected by a huge lobby decorated with a magnificent 55 000 tiles panel that provides access to exhibits and educational area .

Assuming the evolutionary trend of modern aquarium , the Oceanarium continuously develops educational activities that create awareness of the oceans , its inhabitants , its mission and addressing environmental challenges. Also in this context , the Oceanarium collaborates with several institutions in scientific research projects , conservation of marine biodiversity and promote the sustainable development of the oceans . The technical and scientific expertise of biologists and engineers team ensures the excellence of exposure and advises several aquariums and similar institutions .